Ten years ago, I bought shares in Orange (the mobile business) and France Telecom (the parent of Orange), which are now one and the same company. I made two mistakes at the time:

So I was double wrong. And this is what happened to my original investment. Not a disaster, but certainly not great. Time to fire France Telecom? 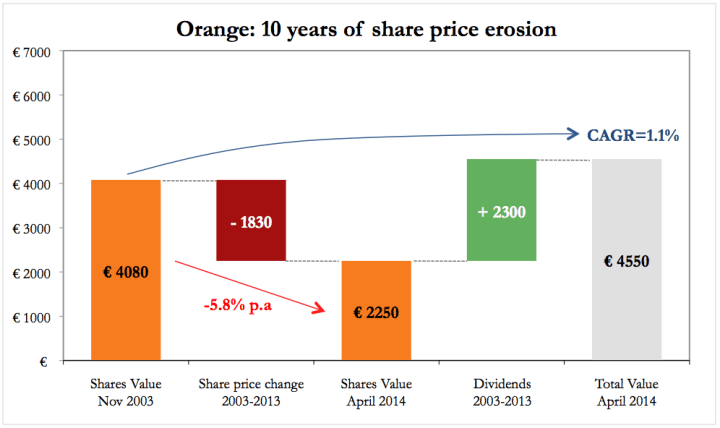 To put things in perspective, and also to explain why Orange’s share price went down over the last 10 years, the following table summarises how Revenues, EBITDA and EBITDA margins evolved at Orange (France Telecom), Deutsche Telekom (DTAG), Vodafone and Orange’s French challenger Iliad over the period 2013-2013.

At Orange, not only did EBITDA margin decrease from 38% to 31% between 2003 and 2013, but turnover also decreased from €46bn to €41bn. DTAG and Vodafone profit margins have also been under pressure, but at least they managed to grow their turnover.

When a company’s profit and its turnover go down, you would expect its management team to be under massive pressure from shareholders to turn the situation around, wouldn’t?

Wrong again, and this it the third mistake that I made. I simply forgot that Orange is not quite a ‘normal’ company: the French state still owns 27% of the shares, and strongly influences its course. And when you are a semi-governmental company in France, managing shareholders expectations appear to be secondary to managing the expectations of other stakeholders.

Back in 2001, I bought shares in Orange. This was on the 13th February 2001, and I paid €9.5 per share, for a total of €2375 (250 shares). As did millions of other shareholders on that day, as Orange was listed in an IPO on the Euronext Paris stock exchange. France Telecom, its parent, had bought the British mobile network operator Orange plc the year before; and this was a time when fixed line operators found it fashionable to spin off their mobile business and list them as separate entities.

In the meantime, the price of the France Telecom share plummeted from more than €90 per share in early 2001 to €20 per share in the spring of 2002. This is when I thought that the price could not really go down much further (it has already gone down by 80% within a 1 year period). France Telecom was after all the incumbent in France with a quasi monopoly in the fixed line business, and solid, recurrent cashflows. Wrong! The price of France Telecom shares has never really gone up much higher than €20 since then, and has been in limbo at around €10 for years now.

In February 2002, I also bought €4000 of shares in Vodafone, and €4000 in Deutsche Telekom. And have held them since that day. These provide interesting benchmarks, as shown in the following exhibits. 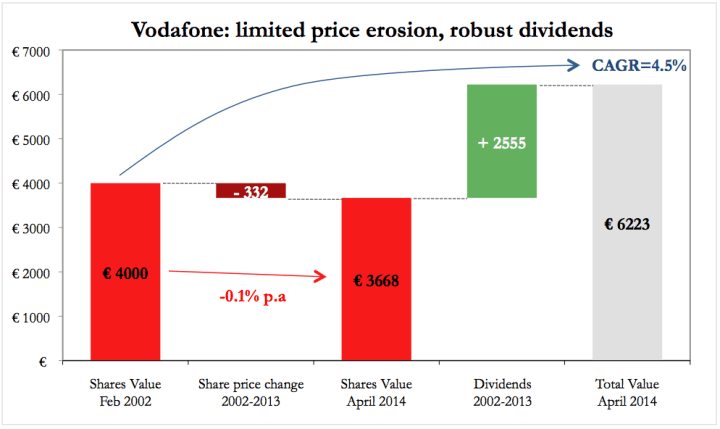 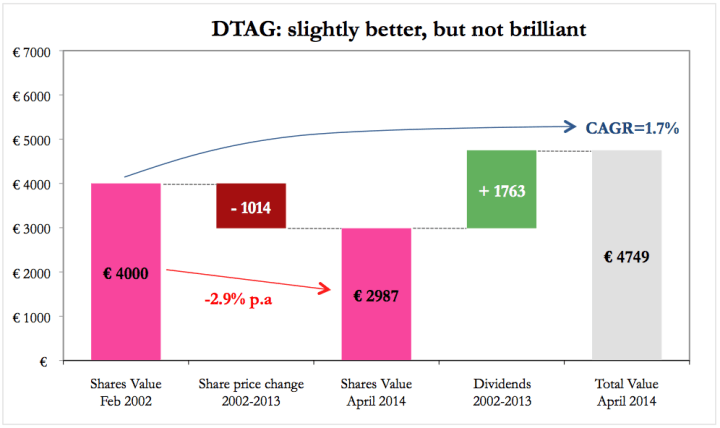 Although the performance of France Telecom for its shareholders is a clear disappointment, you shouldn’t sell (or buy) shares with a rear-view mirror bias, but based on what you think will happen in the future.

Having said that… unless you have reasons to believe that France Telecom will be managed differently in the future by its CEO Stéphane Richard and its management team (and the French state), it might be time to sell your France Telecom shares, if you have any. And reinvest the proceeds in other telecoms companies whom you predict a brighter future, and more freedom to manage performance, as they should.